PARIS—Workers from the United States and Mexico think the time has come for prospective clinical trials of insulin as a neo-adjuvant anticancer drug potentiator in the treatment of breast cancer. They believe their experience using insulin as a biological responsemodifier to manipulate mechanisms that stimulate growth in human breast cancer cells in order to potentiate the effect of anticancer drugs is encouraging enough to warrant well-designed trials.

Speaking here at the Third International Congress on Neo-Adjuvant Chemotherapy, Steven G. Ayre, MD, said complete tumor regression has been achieved without surgery or radiotherapy in patients with breast carcinomas using insulin as a biological response modifier combined with reduced doses of anticancer drugs. He said this treatment resulted in a marked reduction of dose-related side effects caused by the anticancer agents.

Dr Ayre cited four cases, including that of a 53-year-old woman with a 6 cm mass in her right breast, which was inflamed and ulcerated around the areola. She did not have the use of her right arm. Needle biopsy confirmed an infiltrating ductal adenocarcinoma. He said the patient’s breast mass completely resolved with 12 weekly insulin potentiation therapy treatments, with clearing of axillary obstruction and full restoration of the mobility of her arm. “Four years after completing treatment, the patient remains in good clinical condition without any signs of recurrence.”

NEEDLE BIOPSY He also reported that a needle biopsy and xeromammogram from a 31-year-old woman with a 9-month history of a lump in her right breast revealed an infiltrating ductal adenocarcinoma, which was accompanied by two palpable nodes in the right axilla. She received six weekly treatments with the insulin protocol, which resulted in complete regression of the axillary and breast masses. Commenting on those and other case reports, Dr Ayre said insulin potentiation therapy produced equally dramatic complete and long-term regression of tumor masses in all subjects without adverse effects and with excellent cosmetic results. 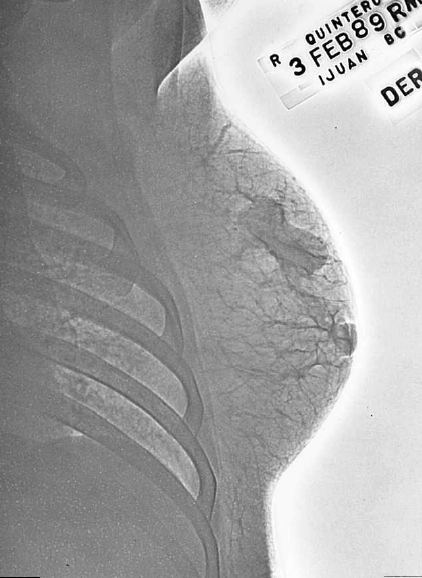 Left: mammogram suggests presence of infiltrating ductal carcinoma accompanied by two palpable nodes in the right axilla. Right: mammogram taken after six weekly treatments with insulin protocol reveals complete regression of axillary and breast masses. He pointed out that insulin-potentiation of anticancer drugs is similar in concept to estrogen recruitment of breast cancer cells to enhance chemotherapy, which has shown promising results in clinical trials. He added, however, that insulin plus chemotherapy is more effective because estrogen recruits only estrogen-receptor positive human breast cancer cells (HBCC), while insulin can recruit both estrogen-receptor positive andestrogen-recepto7 negative HBCC into S-phase, and only insulin can enhance transmembrane passage of anticancer drugs. Moreover, he said, the chemotherapy potentiating activities of estrogen depend on the presence of insulin.

“For those reasons, a chemohormonal strategy using insulin potentiation, rather than estrogen recruitment, would have better efficacy, as well as better safety because of the lower total dose of drugs used,” Dr Ayre explained.

PHARMACOLOGIC DOSES “We administer pharmacologic doses of exogenous insulin to patients with breast cancer and, at onset of hypoglycemia, follow this with low doses of anticancer drugs in a 50% hypertonic glucose solution,” explained Dr Ayre, of the Chicago Medical School, North Chicago, Illinois. “Drug potentiation results from an insulin induced increase in transmembrane passage allowing for greater intracellular concentration of drug, and the recruitment of cells into Sphase of the cell replicative cycle by cross-reaction of insulin with insulinlike growth-factor 1 receptors, rendering them more susceptible to the anticancer drugs, particularly cell-cycle phase specific agents.”

MEMBRANE RECEPTORS Insulin receptors are reported to be present on all breast cancer cell membranes, the Chicago physician continued, and higher concentrations of insulin receptors have been demonstrated in breast cancer cell membranes than in fat and fibrous tissue elements within tumors. “As it is logical to assume a correlation between receptor number and degree of ligand effect, this higher concentration of insulin receptors of HBCC membranes would render the insulin potentiation therapy effects more predominant in breast cancer cells than in cells of normal tissues within the host,” he said. Dr Ayre acknowledged that carcinomas of the breast are a heterogeneous group of diseases because of their differences in regional lymph node involvement, estrogen and progesterone receptor content, S-phase fraction, DNA ploidy and cathepsin-D production, and that none of those factors were evaluated in the anecdotal cases he presented.