Key nutrients, vitamins, and minerals are essential to the healthy function of our bodies. Ideally, these nutrients should come from our diet, however, in times of illness, many people turn to dietary supplements to supplement their diet. People with cancer can benefit immeasurably by consuming a diet rich in nutrient containing foods. The following list will give you a start in putting together a diet and supplement regimen that might work for you. Please consult with Rebecca Ayre BSN or one of our doctors if you need help in putting it all together.

Research shows that Vitamin D plays important roles in immune function, healthy cell growth and division, cancer prevention, and possibly cancer management. Sunlight is the most significant source of Vitamin D, stimulating the production of D3 in the skin. Few foods naturally contain Vitamin D, and all are seafood or animal in origin such as salmon, sardines, mackerel, and egg yolk. When exposed to ultraviolet radiation, levels of Vitamin D in mushrooms increase to many times the recommended daily intake. The stability and bioavailability of this practice however, has not yet been determined. The following mushrooms contain significant amounts of Vitamin D when consumed raw:

A powerful antioxidant, Vitamin C protects vital molecules in the body such as proteins, lipids, carbohydrates, and DNA and RNA from damage. It also plays a role in stimulating our immune systems. Humans cannot synthesize Vitamin C, therefore it must come from a plant source. The following fruits and vegetables are all excellent sources of Vitamin C and other nutrients:

Iodine is an essential element of the thyroid hormones T3 and T4. There is also evidence that it can prevent and/or slow estrogen sensitive cancers such as breast, prostate, and ovarian. Seafood and sea vegetables such as kelp, wakame, and nori are generally the highest dietary sources of iodine. Iodine can also be found in dairy products such as yogurt, cheese, and milk from animals pastured on iodine-rich grasslands. Strawberries have also been found to contain iodine.

A natural component of the rhizome of curcuma longa, curcumin or turmeric has several important biological properties. Studies have documented curcumin’s role as an antioxidant, an anti-inflammatory, its abilty to inhibit angiogenesis (new blood vessel growth which is a mechanism by which tumors grow), and its specific antitumoral activity. Imparting a bright yellow color to everything it touches (including clothing), turmeric is most commonly used in curries and soups. It can also be sautéed with onions and just about any vegetable or meat for a simple, nutritious dish.

Glutamine is an amino acid synthesized by the body from glutamic acid or glutamate. People with cancer tend to exhibit a deficiency. Glutamine plays an important role in immune function and gastrointestinal health. It might also increase wound healing. Foods that readily provide this amino acid include cabbage, beets, spinach, beef, chicken, fish, legumes, and dairy products.

Resveratrol is produced by some plants in response to injury, stress, fungal infection, and ultraviolet radiation. In vitro and animal studies have demonstrated that this antioxidant can prevent cancer, possibly induce cancer cell death, and potentially prevent the spread or metastasis of cancer. Food sources of resveratrol are:

Animal studies conclusively determine that selenium supplementation dramatically reduces the incidence of cancer. Important studies have also shown that selenium might have cytotoxic effects on cancer cells and could be used as an anticancer agent. Foods containing selenium are many and diverse:

Tea is an infusion of the leaves of the Camellia sinensis plant, and are not to be confused with herbal teas. White tea also contains beneficial compounds and is made from the buds and young leaves of tea plants. While some researchers initially thought tea’s anti-cancer activity might be attributed to its antioxidant properties, there is now indication that the flavonoids in tea modulate cell-signaling pathways, converting cancerous cells to normal, healthy ones.

Naturally produced in the pineal gland and gastrointestinal tract, the hormone melatonin is a powerful antioxidant with anti-inflammatory properties. There is a possibility that melatonin might have some chemotherapeutic properties, however this is not conclusive. It can also inhibit bacteria and bacterial products from entering the body through the intestinal membrane. Foods that contain small amounts of melatonin are olive oil, wine, and beers.

Members of the vegetable genus Brassica, also called Cruciferae, are unique for containing sulfur compounds called glucosinolates. These compounds provide a host of cancer preventative and cancer management properties, from detoxifying estrogen and estrogen-like compounds, preventing the growth and spread of cancer, and stimulating immune function. They are also very tasty and diverse group of foods:

Inositol hexaphosphate is a carbohydrate that occurs in almost all plant and animal cells. IP6 enhances the anticancer effect of conventional chemotherapy, controls cancer metastases, and improves the quality of life, as shown in a pilot clinical trial. Grains and high fiber foods such as legumes contain significant amounts of inositol hexaphosphate:

Present in garlic, onions, and leeks, organosulfur compounds have numerous beneficial biological effects for the prevention and management of cancer and also for cardiovascular health. Potential carcinogens are rendered inert, cell cycles are regulated, and organosulfur compounds have been shown to induce apoptosis (cell death) in lab and animal studies. Of additional interest, garlic might have antibacterial and antifungal properties.

Heating or boiling garlic can inactivate the enzyme alliinase, but if you allow crushed or chopped garlic to stand ten minuets before heating, this might prevent the inactivation of the enzyme. 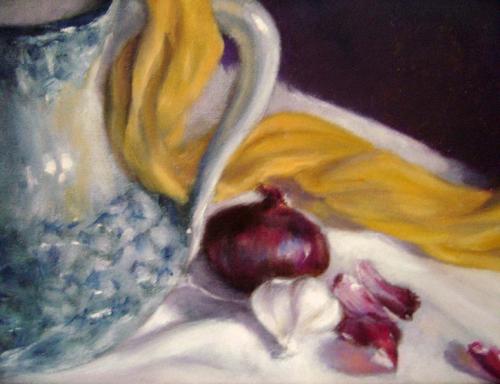 * This information was compiled from the following websites: