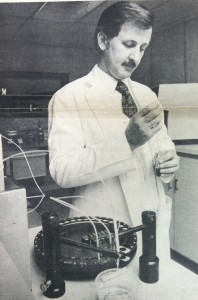 Hypoglycemia! The name itself sounds dreadful, enough to keep you awake at night just thinking about it. But a Zion doctor asserts that it isn’t even a disease – although it still must be taken very seriously.

Dr. Steven G. Ayre, a staff physician at American International Clinic in Zion, takes hypoglycemia very seriously. “I’m mostly a family practitioner, with a nutritional orientation,” Ayre said, “but hypoglycemia is the central focus of what I do.”

Hypoglycemia, according to Ayre, is a metabolic condition. “I like to avoid calling it a disease,” he explained. “It’s really a metabolic dysfunction involving carbohydrate metabolism.” Sugar – and things that act like sugar – is the culprit; “everything good to eat,” he added wryly.

While hypoglycemia, in itself, is not a disease, it is a precursor to other health problems. “It’s a mediary between the ‘well’ person and a person with a diagnosable organic disease,” Ayre explained. “Our aim is to stop it before it gets worse, because it can contribute to degenerative diseases such as arthritis, diabetes, heart disease, hypertension, and cancer.”

The condition usually manifests itself with a lack of energy; “fatigue, fatigue, fatigue,” the transplanted Canadian outlined. As it progresses, the sufferer will feel very drowsy two or three hours after eating; acute cases are marked by sweating, trembling, and palpitations, accompanied by an intense craving for sweets. The condition can be diagnosed with a five-hour glucose tolerance test and/or hair analysis.

Excessive carbohydrates are the usual cause of hypoglycemia, Ayre said. “The average North American eats 140 to 180 pounds of sugar per year, and 65 percent of that is hidden, such as in soft drinks and other foods. Ketchup, for example, is 25 percent sugar.”

Excessive sugar in children can cause hyperactivity and learning disabilities, he asserts. Unfortunately, modern medicine has done little to solve the problem.

“Conventional medical wisdom states that there is not relationship between a person’s diet and some of these diseases,” Ayre said. “But this is changing. Doctors like myself have changed already, and are looking to the diet as part of the problem.

“Modern medicine is geared to – and does a marvelous job of – crisis intervention and management of trauma,” he continued. “But when it comes to dealing with a significant portion of complaints seen by general practitioners time and time again, often an investigation will be done and no acute organic illness or disease will be found.

The patient is usually dismissed as a hypochondriac, or it’s called stress related illness; the patient is told to take a vacation. Or he’s given “Vitamin V:’ Valium.

Ayre, however, prefers to control hypoglycemia through nutrition, using it side-by-side with conventional medicine. “The condition can be easily managed through dietary and nutritional practices,” he asserts. “But if left untreated, in time hypoglycemia can lay a firm foundation upon which you may subsequently build some real organic disease.”

What can you do to avoid hypoglycemia? “Avoid eating completely purified carbohydrates such as sugar, white flour, and highly processed foods,” he suggested. “Eat less instead of more. Avoid using coffee, tea, alcohol, and nicotine, and look on food as nutrition, not entertainment.”

Ayre’s holistic approach to medicine fits well with his self-image as a family practitioner. “I believe in the old school, taking time with all your patients and finding out all things about their lives,” he said. “I would love to see pregnant ladies, kids, old people, cuts and sprains in my practice.”

Ayre came to American International Clinic in February 1982 from his home of Montreal, Quebec. He lives in Winthrop Harbor with his wife, Laura, and their children, Sarah, 7; Rebecca, 4; and Emily, 2.

Photo and article by Bill Christopher